The Swiss president, who has a fear of heights, took the trip surprisingly well, and on reaching her destination, said, “What we do in politics is trivial in comparison to this work,” adding the ride was “pure thrill, just great.”

A funicular railway, also known as an inclined plane or cliff railway, is a type of cable railway in which a cable attached to a pair of tram-like vehicles on rails moves them up and down a steep slope, the ascending and descending vehicles counterbalancing each other.
READ MORE: Smart parking solution based on cryptocurrency payment
Actually, the oldest documented funicular railway dates back to 1515. It was used to haul goods into Hohensalzburg Castle at Salzburg in Austria. Through the ages, funicular lines have been used in regions where steep mountains or inclines in the topography prevented normal travel or navigation. 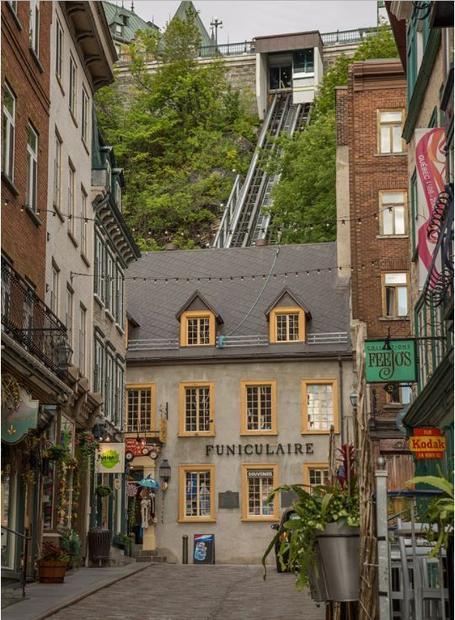 Around the world, you can still find funicular systems, from the Old Quebec Funicular in Quebec City, Canada, to Spain, with the Bulnes funicular being an unusual two-rail installation that runs in a tunnel. Malaysia, Hong Kong, Norway and Chile all have funicular lines that are still operational.

A string of giant hamster wheels
The Stoos funicular railway line has to be in a class all by itself. The cabins on the 52 million-Swiss franc ($52.6 million) funicular resemble a line of rotating hamster wheels going up the mountain, but the cylindrical cabins have floors that always keep the passengers level.

The railway is also the steepest funicular line in the world today, surpassing the Gelmerbahn, which climbs to the Gelmersee lake in the Bern region of Switzerland. It has a track length of 1,028 meters (3,373 feet) and an inclination of 106 percent. 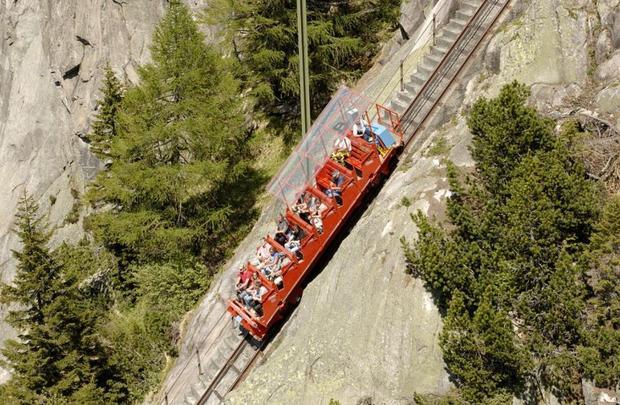 The Gelmerbahn, with an incline of 106 percent, was the steepest funicular in Switzerland and Europe, until the opening of the new Stoos Funicular in 2017. (Image dates December 7, 2010.)
Kraftwerke Oberhasli AG/TheFotostudio.ch

The new line replaces one that was in operation for 33 years. The new funicular not only goes up the mountain at a 110-degree incline but goes through three newly constructed tunnels along the route. The project took 14 years to complete. The Stoosbahn went into service on Sunday.

To do that, the funicular features high-tech cylindrical carriages with hydraulically-controlled floors so passengers will remain upright as the line travels up the Alpine slopes outside Lake Lucerne. This unique feature was made possible by ABB Global, a leader in industrial digitalization.
READ MORE: The year the ‘caliphate’ collapsed
The company designed the two custom-built motors that allow the new Stoos funicular to climb the 744-meter difference in altitude at an angle of almost 48 degrees in half of the time it would have otherwise taken. 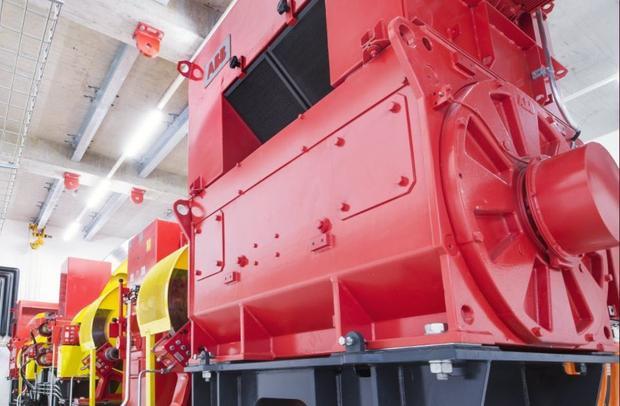 Q&A: The need for improved financial literacy is now paramount

Leading websites rated for accessibility for the visually impaired

Environment Canada has issued an unprecedented "red alert" for parts of British Columbia as the province braces for additional rain.

In joint op-ed, China and Russia decry US democracy summit

A rare joint opinion article by the ambassadors of China and Russia has sharply assailed President Joe Biden's plans for a virtual summit.

Seventy-one people were killed in the crash. Follmann, now 29 years old, is one of six who survived -- though he lost his right...